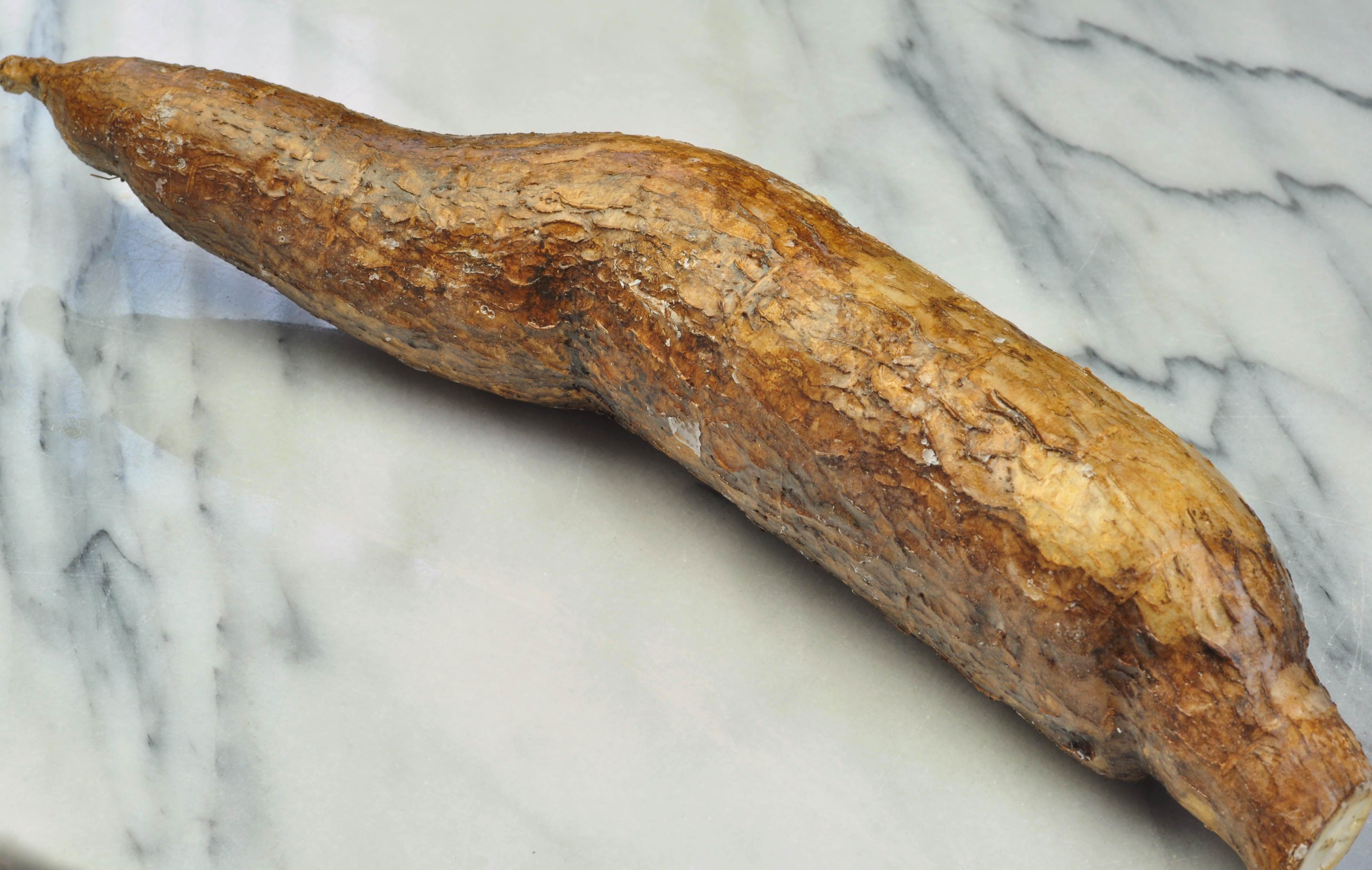 Did you ever stop by a brown, big and waxy tuber at the vegetable store wondering what on earth it was? I have… And I found out that it was cassava that I had stared at the whole time. But what is it really? And what on earth do you DO with it?

Like potatoes in northern Europe and the plantains in Africa, Asia and Latin America, the cassava is a staple foo,  especially in the tropics.
The plant can grow up to five meters high but it is mainly the starchy tuberous root you eat, even though the leaves can also be eaten.
Each root can grow huge, up to even 10 kg! The root knuckle has a brown, tough and tight shell that is easy to cut off with a sharp knife. The inside has a white to light pale yellow color.

The long tubers contain a lot of (resistant) starch but less amounts of protein and vitamins and therefore is a major source of carbohydrates providing a basic diet for over half a billion people in the world.
To be able to eat the cassava, it must be prepared in some way. In its raw state it is toxic because of  the cyanide inside. The toxic is mainly in the shell but also on the inside and it remains very important not to eat it raw! Prepare the cassava by roasting, fermenting, grinding or boiling the root buds.

In the shop you will find often processed cassava in the shape of cassava flour, tapioca flour and tapioca beans.
There’s a big difference between the cassava flour and the tapioca flour! The cassava flour consists of peeled, dried and grounded cassava while the tapioca flour has been extracted from the starch from the cassava. This makes it low in nutrients but very functional when baking  gluten-free for example.
The tapioca flour can bind together and create a great consistency when making pastries. Something that is rather unique for gluten-free flour. Tapioca flour mixed with lukewarm water and some oil can also be used as an egg replacement.
In addition to the processed cassava you can of course also find it fresh, frozen and in various products such as crisp etc.

The tapioca flour have a neutral taste and a light, fluffy consistency, whose characteristic are often compared with wheat flour.
You often can find tapioca flour in shops selling Asian food since its often used as binding agent in sauces and soups. The flour gives a high glossy and translucent result to a dish which can be handy in both sauces, soups and desserts.
I have noticed that the quality of the flour may differ depending on the brand sold.  Take the time to try some different brands to find your favorite.
The processed cassava products sold in the western part of the world have had careful controls and you therefore don’t have to worry about the cyanide in these products.
Cassava is free of both gluten and nuts making it suitable for people with allergies.

The taste of cassava?

The taste of the cassava sold in regular stores is rather flat and neutral neither sweet nor bitter, which obviously opens up for a lot of opportunities to just add flavors!
However there are several varieties of cassava with more or less bitter taste. In general the rule is, the more bitter taste, the more toxic that needs to be removed before eating it.
As a first introduction to my cassava adventures, I went for frozen and already peeled and cut cassava that could go straight into the pan. So easy!
But of course you could also buy the fresh cassava. Start by cutting the cassava in smaller pieces (it will be easier to handle like that) and cut off the tight shell with a sharp knife.
Divide the cassava into smaller pieces and boil until soft.
Discharge all utensils very well afterwards and wash your hands thoroughly.

Cassava is fun to work with and within short there’s a first recipe here on the blog, a pizza! It will certainly be more in the future!