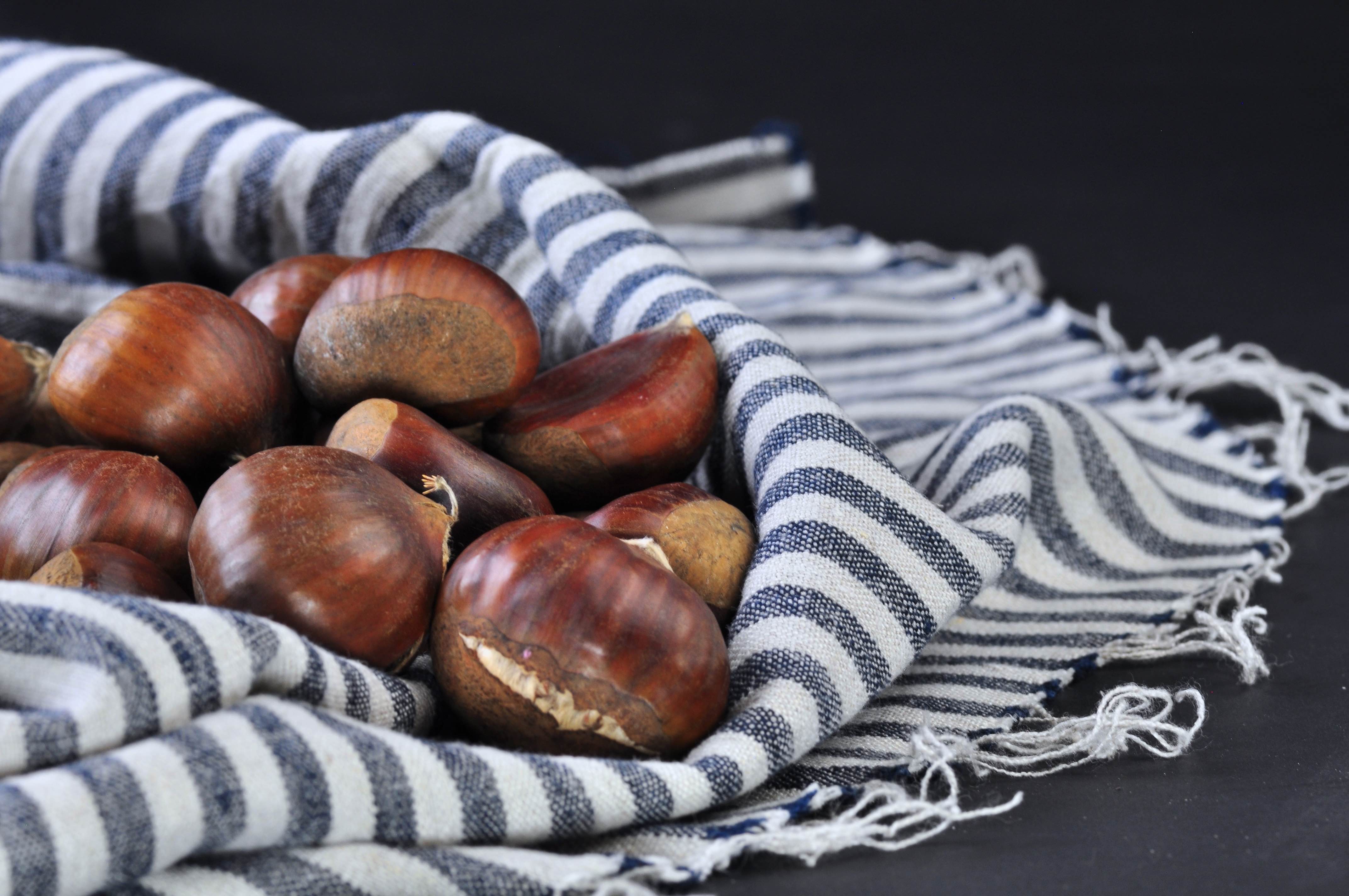 Chestnuts roasting on an open fire. Jack Frost nipping at your nose … A classic song with Nat King Cole. At this very moment, the new harvest of chestnuts has arrived and its high time to enjoy the seasonal goddess!

Chestnuts are grown mainly in southern Europe and are extremely popular in France, England and Italy, and especially in Corsica.
This year I was lucky to find Dutch chestnuts grown almost very close to where we live!

Once you find them, select chestnuts that are heavy for their size with tight, shiny skin. Avoid nuts that have mold on their surface or rattle in their shell—this means they’re old.
Store the chestnuts dry, cool and dark. They should be eaten within a few weeks.
Should you already have peeled them, store them in the fridge in an airtight container and enjoy them as soon as possible or within a few days (or put them in an airtight container in the freezer).

Always cut the chestnuts in the top before getting started! Cut a cross with a serrated knife at the tip of each chestnut. This will prevent the chestnuts from exploding in the oven, which can cause a certain amount of extra cleaning job… The cross will also make it much easier to peel the chestnut later.

The chestnuts can be enjoyed in several ways, the way that Nat King Cole is singing about is one of the most cozy ones, in front of the open fire in a wintry landscape.
After you roasted the chestnuts you eat them with butter and a pinch of good salt. Surely a little bit fiddly to do but oh so nice to do together! I remember it myself as one of the highlights of the winter from my childhood, oh that made me sound very old haha!

If you’re not a happy owner of a fireplace, it’s also works perfect to roast the chestnuts in the oven.
Preheat the oven at 200° C. Take a deep oven tray and your nice chestnuts.
Place the chestnuts on the tray, cut a cross in every chestnut and place the oven tray in the oven. Remove the tray after about 12 minutes and turn all chestnuts to avoid burning.
Place the tray back in the oven and bake for another 12 minutes.
Prepare a bowl and place a kitchen cloth in it, pour in the hot chestnuts and immediately cover them with the towel.
Take a few out at a time and rub with a towel to make the shell loosen slightly. The warmer the chestnuts are, the easier it is to peel them but watch out, it’s very easy to burn your fingers!

If you have the opportunity (and time!) it’s easier not to roast too many chestnuts at once but divide them. This way you have enough time to peel the chestnuts before they cool down to much that the inner shell will “reattach” to the chestnut.
It is important to remove the inner shell from the chestnut as it is both hard and very unpleasant  to get in your mouth.
If you want to make it easier for yourself, you can also find vacuum-packed chestnuts that are already peeled. Then you can easily start cooking instead.

Another way to get rid of the hard shell from the chestnuts is to boil them. Boiled chestnuts have a different taste than the oven-roasted ones and have a sweeter taste. With these you can easily make a puree, a pasta sauce or even a paté (recipe coming soon).
Place the chestnuts in boiling water and then pull the pan from the heat and cover with a lid. Let them soak in the water for an hour and then cut the skin open. This way, it´s easier to get out beautiful, whole chestnuts. It think it really works great!

You can also buy ready-made chestnut puree in a can. You can find it in both a sweet and unsweetened version. They usually smell quite disgusting (honestly, something like cat food…) when they are opened but somehow it disappears later and they work fine for both desserts or creamy sauces. And don’t worry, the horrible smell will for sure go away when making something with it!

Finally, you can buy chestnut flour made of dried and grounded chestnuts. Be sure to look at the shelf life on the package for the flour.
The flour is at its best between November and January when it is freshly grounded. Just like other nuts, chestnuts and chestnut flour get rancid quite soon if not used. Store an opened bag of flour in an airtight container with lid in the freezer.
With the flour you can bake cakes, make gnocchi, polenta and even pasta!

Last year I posted two recipes for a good soup of chestnut and crispy sage and a chocolate truffle with chestnut on the blog. Soon I will post more recipes with chestnut!

Do you eat chestnuts? What is your favorite way of cooking with them? I look forward to read your stories!

PS! Chestnuts should not be confused with horse chestnuts that are poison to the human!