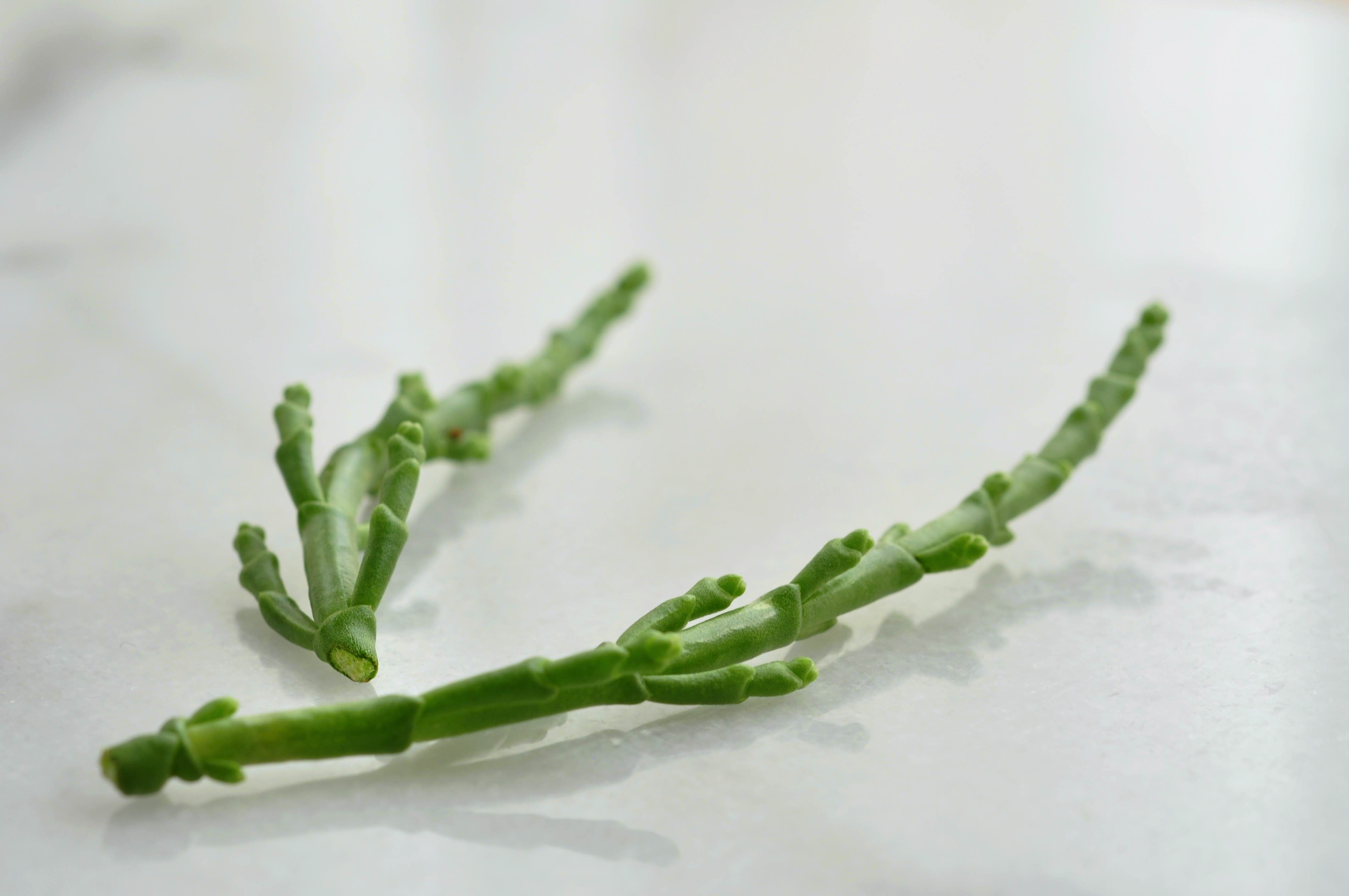 Salicornia, sea asparagus, pickleweed and marsh samphire. All names for the same plant. A plant without leaves but with “fleshy” stalks divided into smaller stalks. Each stalk reminding very much of a claw. In American, the veggie is called “chicken claws” for a reason … Today’s salty tastebud is Salicornia.

Since a number of years we can here in the Netherlands, buy the Salicornia on both food markets and in grocery stores. Earlier it was mainly the local people along the coasts who knew the delicacy. In both France and England, it has been eaten for a long time.

The plant (meaning not a seaweed maybe opposite what you would think at first thought) grows in salty wetlands, on shores, beaches and marshes. These areas along the North Atlantic and North Sea coast are regularly flooded with salt sea water. That’s where the Salicornia likes it the best.
If you really are hooked on the taste of Salicornia and having trouble finding it in a store, you can also grow it yourself in a pot or in open ground!
Plant the Salicornia in a sunny position in a light sandy soil well-drained. Water it with a mix of salted water and you can enjoy your own homegrown Salicornia. It will even re-seed itself if you leave some of it to do so!
In the Netherlands we mainly find it fresh in the stores, but in France it’s also available pickled in water or vinegar.

The best season of Salicornia

The best time to enjoy Salicornia is from June until late summer. Later the plant grows more woody, get a bitter taste and is no longer as enjoyable.
If you get the chance to buy Salicornia, look for clear green plants that looks healthy and without white or brown spots. Later in the autumn some of the spices also will turn red.
Once you’ve got your hands on it, don’t let them stay too long in the fridge. The best is to immediately do something with it!
Rinse the stalks in cold water before cooking to remove any sand and gravel.

How do you eat Salicornia?

Enjoy the Salicornia raw, blanched or quickly fried.
When blanching, bring the water to a boil and then add the Salicornia. Be careful not to add any salt because the plant itself is salty!
Boil until you get the consistency you prefer, you choose yourself. Crispy or soft as the British recommend it in the recipes with 10 minutes of cooking. Rinse the ready Salicornia in cold water when ready to stop the process of cooking.
Serve the Salicornia with some oil or butter, freshly ground pepper and vinegar or lemon. It will be a great addition to several dishes!
Or dare to think differently. Maybe something sweet, nutty, crispy or spicy would do great with your salty Salicornia?
Mostly you see the Salicornia served as a beautiful garnish adding a nice flavor of the sea to the dish.
In India researchers at the Central Salt and Marine chemicals research institute have found a process to make a culinary salt made out of Salicornia called Saloni.

What do I combine it with?

Salicornia finds its tastebuddys with other green vegetables like asparagus and cabbage. It also works perfect with legumes or pasta.
You can also enhance the sea flavor from the Salicornia and add it to dishes giving it a touch of the sea without using any fish and seafood.

In a day or two, there is a simple recipe published on the blog using Salicornia.
I hope you are inspired to look for this exciting veggie, it’s well worth a try!