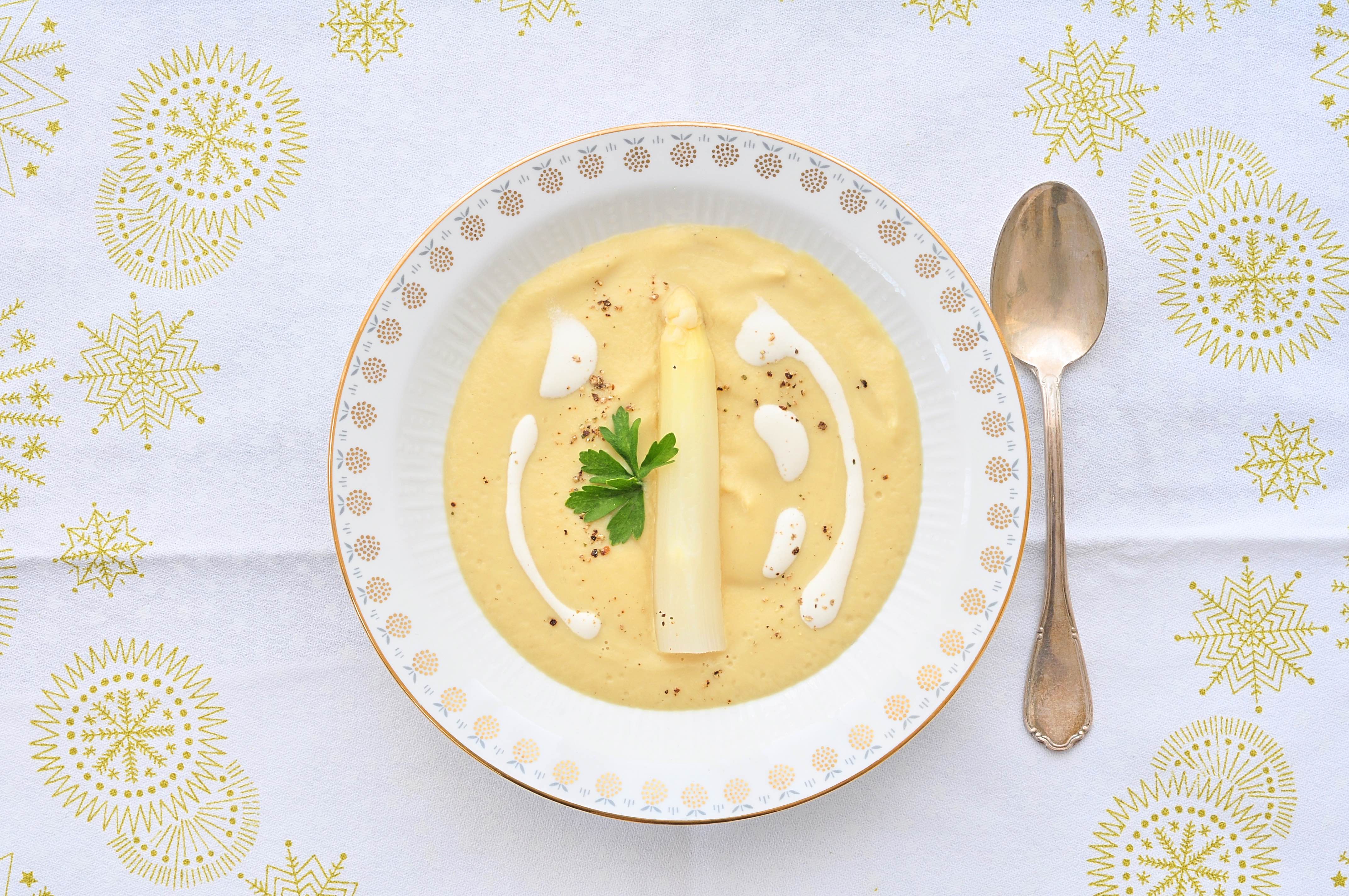 I like the idea of using everything when I cook so when I made my pickled white asparagus a few days ago, I also immediately made a soup of the asparagus peel left.
A creamy, white asparagus soup with a lot of flavor!

By making an infusion of the asparagus peel I could get a flavor bomb of asparagus even though I actually didn’t have any asparagus in the soup itself. Permitted cheating if you ask me. However, if you happen to still have some freshly cooked asparagus they are obviously great to add to the soup when serving!

An easy soup to make and ready in half an hour.
Combine that with a slice of crunchy bread to get more saturation.
Let’s get to work!

For four people as an appetizer or for two as lunch
Ingredients
Infusion:
The remains of 500 grams of white asparagus (peel and the woody stems).
about 4 dl / 400 grams of plant-based milk (almond, cashew or soy milk)
1 dl / 100 grams of dry white wine
1.5 tsp loose vegetable bouillon powder
——————-
Half a celeriac
1 yellow onion
Half a leek (only the white part)
The “leftover” milk after making the asperges infusion
Possibly some more white wine, salt and grounded white pepper

How do I do it?
1. Start with the infusion:
Place all the remains of the asparagus into a larger pan. Add the wine, the broth powder and plant based milk of your choice. Bring to a boil and let the mixture simmer with the lid on for 10 minutes (no longer, as it will only become bitter!).
Strain and keep all the fluid. The rest of the vegetables from the infusion can be discarded.
2. Peel the celeriac and onion, cut it into smaller pieces. Wash the leek well and shred it. Put everything in a large pan and add the liquid from the asparagus infusion. Let everything boil with the lid on until the vegetables are soft.
3. Mix with a hand blender until you have a creamy soup. Dilute/ flavor with some more white wine and add salt and pepper. Add some cashew sour cream, freshly ground black pepper and possibly some parsley on top. If you have some boiled asparagus left it’s nice to add it to the soup as well. Serve immediately.

This recipe is free from lactose, gluten and refined sugar.