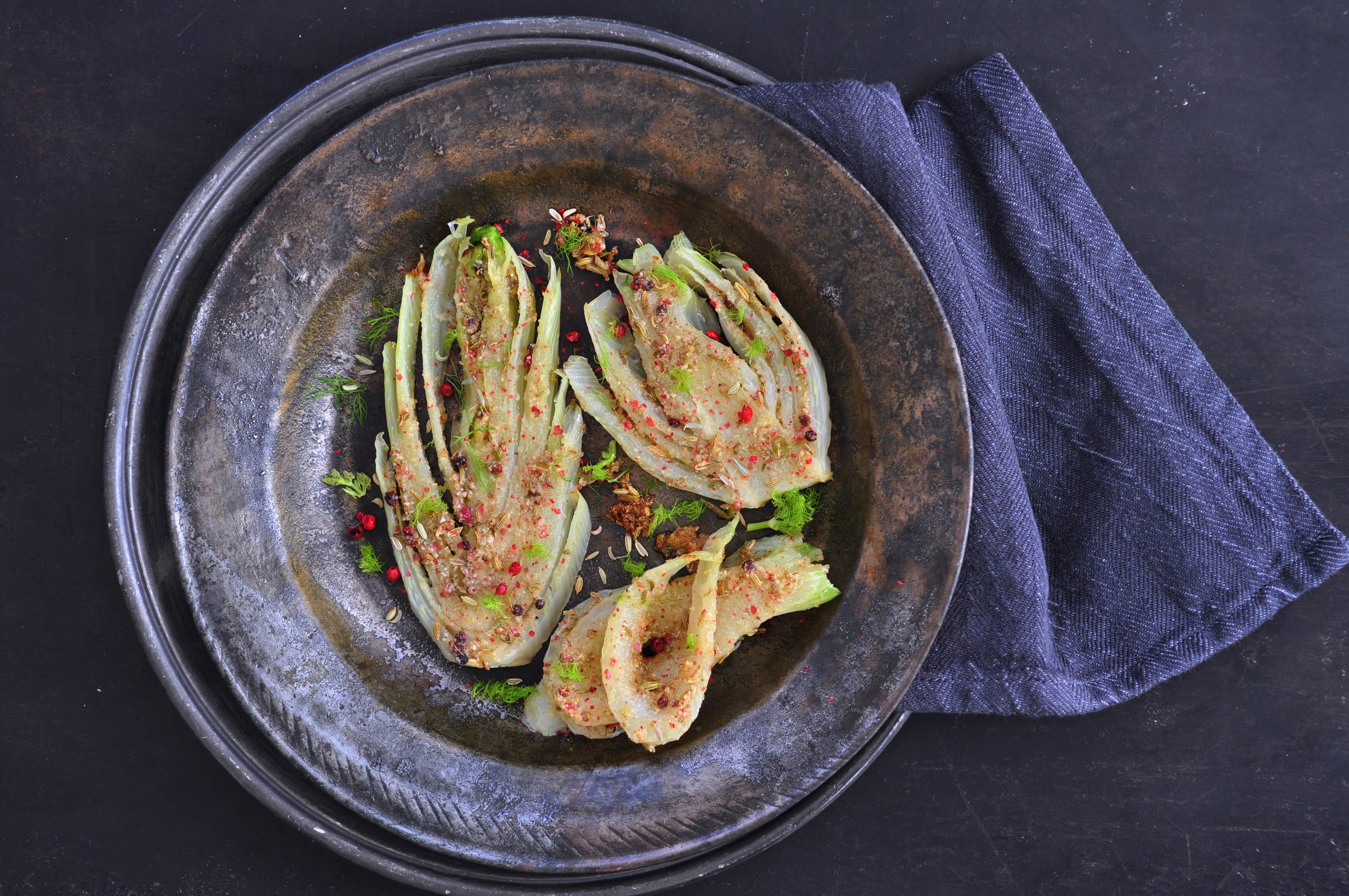 The fennel is at it’s best right now! Therefore, I serve you my new favorite, baked fennel with pink pepper and almond flour. If I got the chance I could probably eat this every day for a while…I simply love fennel. Crispy and with a mild tone of liquorice.  I’d like to eat it just as it is or thinly sliced ​​with a few drips of a fruity olive oil, flakey sea salt and some lemon.
But today its baked fennel with pink pepper and almond flour. I like to serve it together with a generous salad covered with a good dressing and maybe some boiled potatoes. in my humble opinion nothing more is really needed. But if you want to make it a bit more special, you could also consider adding some good olives and other salty toppings.
There is something magical happening when combining the fennel, the sweetness in the agave and the almond flour. And then the shape of the vegetable itself. So delicate shape and color? Be sure to cut the fennel in thin slices that still cling to the root bracket. Then you can marvel the shape of the fennel also when it’s served on each plate.
But enough talking, let’s get to work!

How do I do it?
1. Fill a pan with water and let it come to a boil. Meanwhile, rinse the fennel and cut off the very top of the root-end end but not too much, they should still hold together! Cut also the outermost parts of the peaks. They tend to be a bit woody. Save the leafy greens on top for decoration when serving.
Pre-heat the oven at 200 ° C.
2. Slice the fennel thinly into slices. Add the fennel to the boiling water and boil until it has softened but still has some resistance. It takes about 7 minutes. Pour over the fennel in a large colander and let it drain.
3. Grind the pink pepper roughly in a mortar (or electric coffee grinder). Add and combine all the ingredients to the marinade in a bowl including the pink pepper .
Pour the drained fennel on a baking sheet coated with baking parchment. Brush the prepared marinade all around each slice of the fennel.
4. Place the baking sheet in the oven and bake the fennel until it has a nice golden brown color (about 10 minutes)
Enjoy!

This recipe is free from gluten and lactose.

Signs of spring! My rhubarb ❤️❤️❤️ I c

I had to laugh inappropriate much to this one just

Yesterday I baked with one of my sourdoughs. I use

Pzzzzzzzz. When it’s time to start baking with

Some days I wonder why I’m doing things. Like I

New post on the blog; I make Mexican fermented Tep

The biggest cafe in Holland at this very moment: D

My first espresso outside this year❤️❤️❤

When I’m trying to get back on the path... Raw f