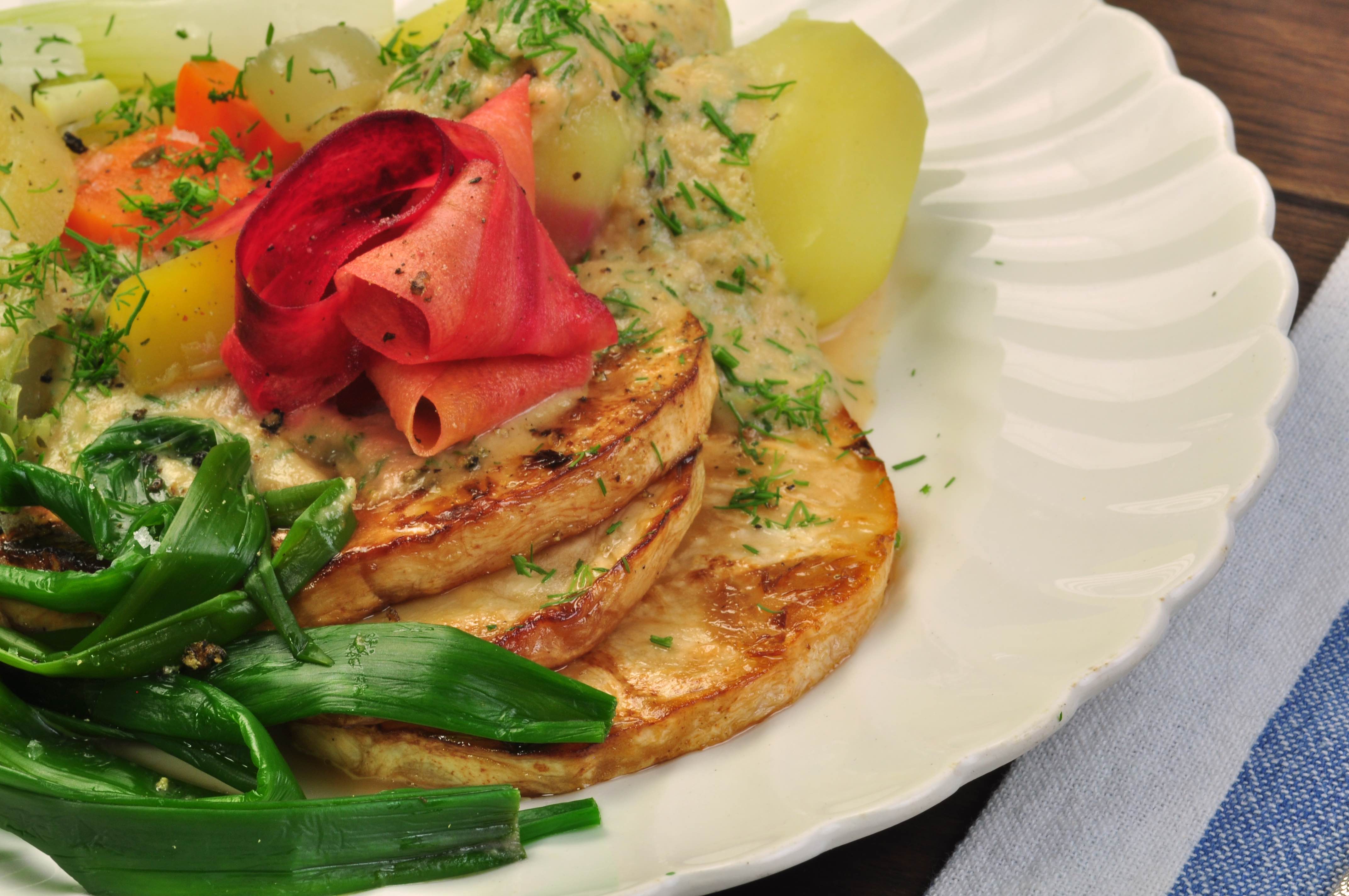 Today the final of the most important competition in professional cooking in Sweden will take place: Årets kock (The chef of the year). A competition started 1982 and initiated by Tore Wretman, the grandfather of fine dining in Sweden. What better moment then making a classic Swedish dish including the typical taste of sweet, sour and lots of dill. Let’s make a vegan remake of dillkött!

Just last week the final of the well-known cooking-competion Bocuse d’Or took place in Lyon where the US won the first price. For this 30th edition, they had a rather sensational news. The chefs had to compete with one 100% vegan dish!
In Årets kock in Sweden they decided to go half way and let the finalists make five vegetarian small dishes.
And the final great news, Mattias Dahlgren a reputable chef last running a two-star restaurant is opening a new restaurant in Stockholm. Rutabaga (yes, the vegetable!) as it’s called will serve only vegetarian food in world-class and again reaching for the stars.

Is this good news or what?! So much fun things happening for green food in the world and in particular in Sweden!

Tore Wretman (1916-2003) was one of the founders of the Academy of Gastronomy in Sweden and has had and still has a great influence on the Swedish food served in restaurants and at home. He brought, at the time the mediocre, cooking in Sweden to a higher level introducing French gastronomy and combining it with “husmanskost” (or potluck in English). Several Swedish classics were created, reinvented and/or introduced by mr Wretman and has given traditional food new life.

One of these dishes is Dillkött (traditionally made with lamb or veal) with a well-known combination of sweet, salty and sour that is very common in the Swedish “husmanskost”. Husmanskost includes dishes eaten daily in an everyday home but also in restaurants in Sweden and full of flavors! It is often typical slow-cooked dishes that we all know from our grandmothers.

Today I make a green version of the traditional Swedish dish Dillkött. Don’t be shocked by the number of ingredients, its easy to make the dish! If you still think it’s too much work, just try making the carrots once. I’m sure you will be hooked just as all Swedes. Lets get going!

Swedish potluck; a green remake of the Swedish classic Dillkött

Marinade for the celeriac

Boiled potatoes and spring onions to serve with it

How do I do it?
1. Start with the sweet and sour marinade;
add all ingredients part from the carrots to a pan. Let it come to a boil and see that everything is well mixed. Let it completely cool down. This is can easily be prepared the day before and be kept in the cooler to make sure it’s really cold.
2. Peel the carrots and thinly slice them in long slices with using a vegetable peeler. Keep the leftover core from the carrot for the stew. When the marinade is completely cold, add the carrots to it and carefully see that everything is covered with the marinade. Set aside in the refrigerator. The carrots should marinade for at least 2 until up til 8 hours. Before serving, strain the carrots in a colander, throw away the marinade.

3. Prepare the marinade for the celeriac;
Pour all ingredients for the marinade together in a bowl. Add the sliced and peeled celeriac to it. Carefully see that everything is covered with the marinade. Set aside in the refrigerator.

4. Prepare the stew:
Wash and peel the vegetables. Slice the parsnip, leek and onion in slices of ½ cm.
5. Add everything to a pan including the herbs. Fill up with water just enough to cover the veggies and herbs. Cover with a lid.
6. Let the stew boil for about 10-15 minutes, the veggies should still have a bite. Take out half of the veggies when ready using a skimmer. Add to a bowl and set aside for now.
7. Let the rest of the veggies cook until completely soft without the lid on. When ready, take out the bay leaves and mix everything in the pan with a handblender.
8. When having a puree of the veggies, add the plant-based milk or cream and mix it altogether until that you have a lovely sauce. You might want to let the sauce simmer for 10 minutes to thicken it up. Keep the sauce luke warm while you continue with the rest.
9. Turn on the potato in a pan with water and a bit of salt. When almost ready, add the spring onions to the pan and let it cook for some minutes until soft. Strain the potatoes and spring onions.
10. Heat a big baking pan. When really warm, add some sunflower oil to it (this is to avoid its splashing al over). Add the marinated, cut celeriac to it and bake it on high heat on both sides until soft with a bite. Takes about 5 minutes al together. When ready, add them to a plate while making the last preparations for the sauce.
11. Add the lemon juice, agave, salt and grounded white pepper to the sauce. See that it’s well seasoned. There should now be a mild sweet and sour taste to it. It’s important to balance it with salt! Add the finely cut dill just before serving.
12. Time to serve! Plate the potato, the cooked spring onion, the baked celeriac, and the vegetables from the stew. Pour the sauce over the vegetables, they will become warm from the sauce. Finally add the strained carrots on top, sprinkle some extra dill, salt and pepper on top and enjoy!

This recipe is free from gluten, lactose and refined sugar.